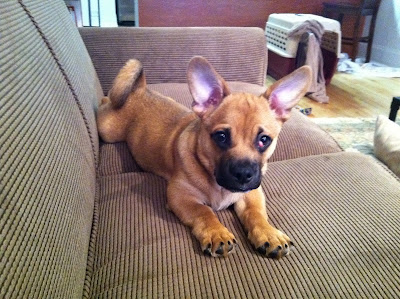 We were pretty sad after losing Solly, but knew that eventually it would be time to bring home a new friend to keep us company. We planned on picking out a random adult dog from a shelter, but when we saw this little guy was an option, we had to go check him out. He's part corgi and part pug, just like Solly. We brought him home when he was just about twelve weeks old, which means he was born back in July.

We decided to name him Murray.

We were hoping that going with the same breed mix would land us a dog with as calm and laid back as our last one. Not sure how true THAT turned out to be, as now we have a puppy who loves to run around in circles at 100 miles per hour and chew on everything in sight, when he's not barking at invisible monsters. I'm thinking we should have paid more attention to the warnings about what level of effort it takes to deal with a puppy. But, we're managing. We love him, he loves his new home, and we're slowly training him to sit and stay and go potty at the right time and in the right place. 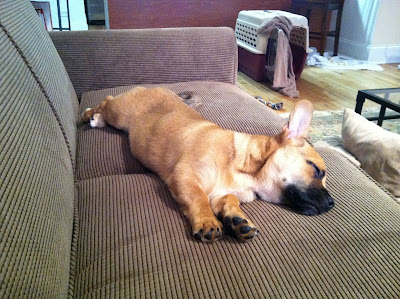 And thankfully, he falls asleep from time to time.
Posted Saturday, October 29, 2011 No comments:
Labels: dog, murray
Newer Posts Older Posts Home
Subscribe to: Posts (Atom)
Al Iverson's random blog about nothing in particular. I blog a lot about email over on Spam Resource. I've been on this internet thing for a while. I use Linux/Unix every day. I do email stuff for an internet company.

You can email me at alcontact102@spamresource.com. No spam, please.