Saturday was our first wedding anniversary, and since we were married in Vegas, we decided to adventure out to a casino to celebrate. It was, uh, an adventure.

We took the Metra train to Elgin, which was fun, except for the drunk people and young kinds riding all over hell and gone with their $5 weekend passes. (I swear, we ended up sitting next to one particular loud douchebag on both trips. When he got on as we were heading back downtown, we actually ended up switching cars to get away from him.) In spite of that, riding Metra is still nicer than riding the L, as many stations are newer and cleaner, and some have someplace indoors to stand and wait away of the cold.

There was a pretty big FAIL in our adventure plan; the website for the Grand Victoria Casino points out that the casino is only a block from the Metra stop. Which Metra stop? I guess I didn't pick up on it from Google Maps, and assumed they meant the Elgin stop. So we got off at the Elgin stop, which turned out to be nearly a mile from the casino. That's kind of a long walk when there's a ton of snow on the ground, sidewalks are unplowed, and the snow's pounding you in the face. 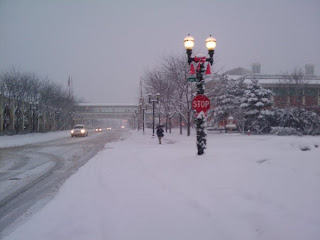 But hey, we were wearing warm coats, and I only slipped and fell in the snow a couple of times. 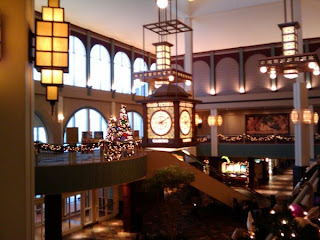 Once we got inside, we realized, hey, this casino is actually pretty small. Nice looking, but there's not much going on there. We kept expecting there to be another gaming floor on the boat. (There seem to be two levels; the main level, and a much smaller lower level.) We were disappointed by the small number of cheap slots to play; there were a whole hell of a lot of $1 and $5 slots. Fun for five minutes of play, but I'm not going to spend $400 playing five dollar slots. The money just vanishes too quickly.

The casino has banners pointing out that they are ranked as the most fun casino. This was a head scratcher until it dawned on me that they're talking about "in Illinois".... only. The casinos in Indiana and Michigan are not included in this ranking. We've been to both the Ameristar and Horseshoe casinos just across the border, and we had more fun both times. Next up on our list is to try the ones in Michigan.

They had a nice looking little steak house, and we considered having dinner there, but we got bored so quickly that we ended up taking the Metra train back to downtown Chicago and we had dinner somewhere in the city instead.

Email me here. No spam!